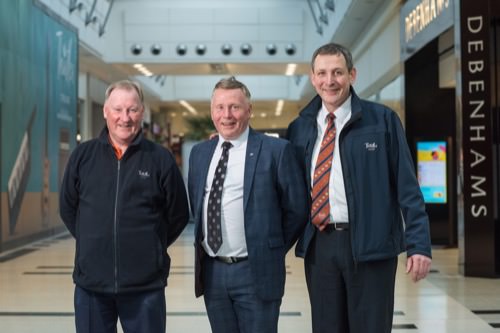 Congratulations have been extended at Thistles, Stirling as two members of staff have reached a landmark 20 years of service with the centre.

Allan Main, a CCTV Controller who lives in Stirling and Willie Nielson, a Resource Operative from Raploch both joined Thistles in January 1999.

Initially starting in a security capacity, Allan was then offered a Controllers position, based in the centre’s control room. During his time he has been a Training Officer and a Team Leader and enjoys the variety of tasks each working day presents.

Speaking about the 20 years service, Allan says; “The work I do is both challenging and rewarding with no two days the same. I have great memories from having worked with so many people, and from so many different walks of life, over the years. I’ve seen a lot of changes and improvements too, the biggest being in health & Safety and customer service. Since I started in 1999, Thistles has become a safer and friendlier place to visit and work in and I’m proud to have played a part in this success.”

Willie Nielson will be a familiar face to regular Thistles shoppers. The popular Janitor / Resource Operative can often be seen out and about in the centre with his colleagues keeping the thoroughfares clean and tidy.

The 20 years landmark has been a time of reflection for Willie who says, “It has been great to see so many developments in Thistles over the last two decades. I still have distinct memories of having to pile cardboard in a storage container, before heavy machinery was in use. It was quite a task. My favourite change has been seeing the progress over the years with The Bastion. It is a real asset to the centre and to Stirling.”

Both men plan to celebrate their work anniversary with a nice meal and a few well-deserved drinks with friends.

“Allan and Willie have been instrumental in the development and success of Thistles over the last twenty years. They are hugely popular with colleagues and customers alike and we wish them both a big collective congratulations for their landmark service.”