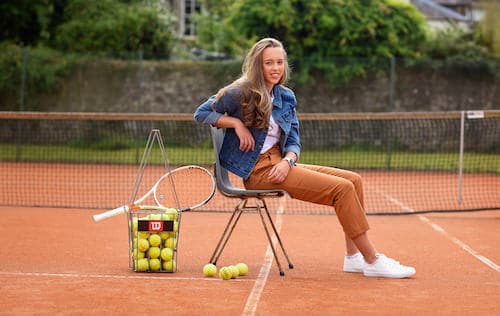 Thistles, Stirling has announced Rosie Sterk, the young Scottish tennis player hailed as the country’s most exciting new talent, as the latest star recruit to its #STIRLINGSHINES campaign.

The 16-year-old has had a meteoric rise over the last two years culminating in her biggest career win to date this summer; winning the Scottish Junior Open Championship. Three hundred of the most talented young players from across Great Britain took part in the Championship and Rosie battled all the way to the number one spot across five matches in the knockout draw.

The prestigious win is the reward for the intensive training commitment Rosie, who lives in Bridge of Allan, has undertaken over the last two years under the guidance of esteemed tennis coach Joe Gill.

Prior to claiming the recent championship top spot, Rosie was runner up in the Scottish Junior Indoor U18 Championship at the start of the year. A feat made even more impressive given the extended age group and experience of her competitors.

From a young age sport has been an integral part of Rosie’s life and she counts basketball, badminton, hockey, swimming, golf, skiing and even tae kwon do as some of the interests she enjoyed throughout primary school.

Tennis has always been the true passion for the ambitious teen though who is now accelerating her daily training commitments to build on her growing success.

A fifth-year pupil at Stirling’s Wallace High, Rosie, whose younger sister Anna is also being hailed as one-to-watch in Scottish tennis, starts training at 6.45am prior to school. Weekends are equally busy with tournaments and coaching sessions, something she is grateful to mum Ruth and dad Kees for supporting her with.

Commenting on her incredible year so far, Rosie says;

“I’m over the moon to have won the Scottish Junior Open Championships and to have beat GB and National Program players along the way. I had to fight really hard in the matches – it was tough – but I knew I was capable of winning especially after making it to the final of the Indoor Championship earlier this year.”

Rising to a challenge is something Rosie clearly thrives on and she is keen to stress the integral part Wallace High has played in supporting and developing her ambition, as well as her parents.

The school has just won the Tennis Scottish Schools Championships with the girls’ team – the first time a girls’ team from a state school has won it, and this is something Rosie is especially proud of.

Most exciting of all, Rosie’s year of success is set to conclude in spectacular style with the news this week that she, and mum Ruth, are heading to China on the 20th of October for eight days where Rosie will be representing Great Britain in the prestigious WTA Future Stars programme.

This outstanding achievement is a result of Rosie winning the UK final of the British Tie Break Tens event at Roehampton in London at the weekend; one which saw her compete against the tournament’s regional winners from across the country…and take the top spot!

Understandably jubilant after such an epic result, Rosie says;

“Winning the British Tie Break Tens in London at the weekend is an unbelievable development to what has so far been a whirlwind year. I still can’t believe it.

“I have worked so hard to get to this point and to now be heading to Shenzhen in China next month is really a dream come true.

On arrival in China, Rosie will be attending a workshop led by Judy Murray, and in what will be an unforgettable experience, she will play on the same court as the top eight female players in the world including Wimbledon Ladies Champion 2019 Simona Halep, Petra Kvitova and Naomi Osaka.

“It will be the trip of a lifetime and so inspiring to be in the company of the world’s most successful and iconic tennis legends. I plan to take as much experience from it as possible and use that to help improve my game.”

With two years remaining at high school, Rosie’s other immediate focus is to maintain good grades whilst building on her incredible tennis success.

A move to the US, where tennis scholarship opportunities reflect the big interest in the game, has been discussed but for now Rosie is keeping her eyes on the tasks ahead for the remainder of the year.

“I hope to stay injury free, keep playing tennis, and continue to build a robust training regime which will hopefully lead to more championship wins.”

Taking time out from her intense schedule, Rosie is the latest high-profile recruit to the #STIRLINGSHINES campaign by Thistles, Stirling. Stepping into the fashion flashbulbs for her debut shoot, which took place at Bridge of Allan Lawn Tennis Club where she trains, the style savvy teen loved swapping her sportswear for the new season retailer collections.

Speaking about the experience of Thistles #STIRLINGSHINES, Rosie said;

“I was honoured and proud to be invited to take part in the campaign.

“It was such a treat having the opportunity to be styled by the team at Thistles and modelling some of my favourite fashion looks.

“This is the first shoot I have done but I loved every minute of it.”

“Rosie is an outstanding young talent and a wonderful ambassador for Scottish youth tennis.

“We are delighted to be celebrating her achievements through the #STIRLINGSHINES campaign and wish her every success as she continues to go from strength to strength.

Jeans and stripe cardigan from Debenhams and top from Topshop

Denim dress from Quiz, boots from Primark and yellow bag from Topshop

Tan jumpsuit from Debenhams with necklace from Topshop